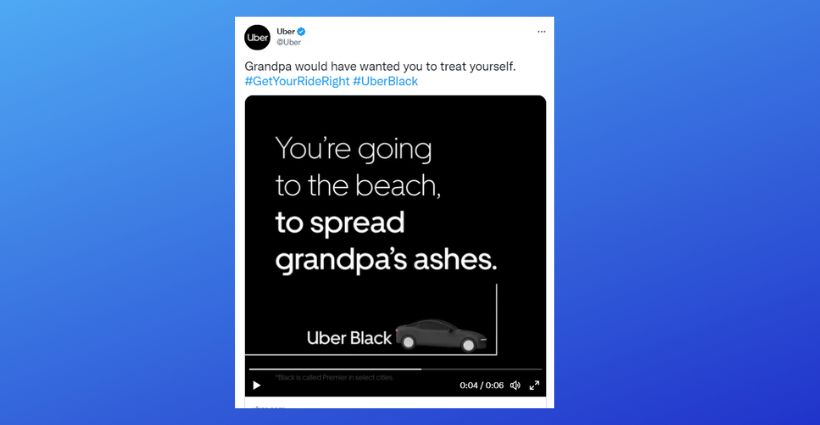 Uber India is in the news and trending on Twitter for a very wrong reason, which has attracted massive criticism from Twitter users. The car rental and aggregator brand Uber (NYSE: UBER)in India is advertising its services using Hindu culture-sensitive advertisement copy. People reacting to the ad are not only from India but worldwide.

The advertisement copy reads, “You are going to the beach to spread Grandpa’s ashes; get your ride right.” Twitter users are reacting to the ad with no action taken from the brand’s end. This is not the first time; earlier, the brand also used “World Rental Health Day” to trend on Twitter in rhyme with “World Mental Health Day,” a critical social concern.

In India, the Hindu-Muslim is a favorite theme for all to exploit but brands reserve exploiting the theme for safety reasons. Writers in agencies hired by these brands or in-house copywriters are expected to respect the sensitivity of the matter and leverage other creative ways to shock and awe Internet users to influence sales.

Given the age and time celebrating self-love and community, it is appalling how Uber could approve the insensitive copy for the “Get Your Ride Right” campaign to highlight its Uber Black, Uber XL, and Uber Comfort rides. On further research, Uber signed a New York-based ad agency, Johannes Leonardo, for this campaign of three ads.

According to AdAge, the “Get Your Ride Right” campaign for Uber aims to “take customers out of their booking autopilot, using humorous scenarios to illustrate their options.” In one, “The Will,” Karl, the character, is at a will reading for his late uncle. When he thinks he’ll get some small plants, he takes the UberX. But when he realizes it is his uncle’s textile, auto and steel plants, he switches to Uber Black.

In another ad of this campaign, is a woman looking forward to a day out when she sees an UberX, but given her 4 kids, she switches to an UberXL. The third is a dad attending a parent-teacher conference at his child’s school. After the meeting, it wasn’t easy to get up from a child-sized desk, so he opted for the Uber Comfort for extra legroom.

Now for an ad agency like Johannes Leonardo to conceptualize this fourth ad copy that triggers memories of the dead is possible, as the first ad rides the wave. However, since there’s not much coverage of this “You are going to the beach to spread Grandpa’s ashes” copy, Uber is responsible for forcing itself on the face of even death. Although eventually, by the time this report is about live, Uber deletes the ad on Twitter to highlight branding gone wrong. ♦