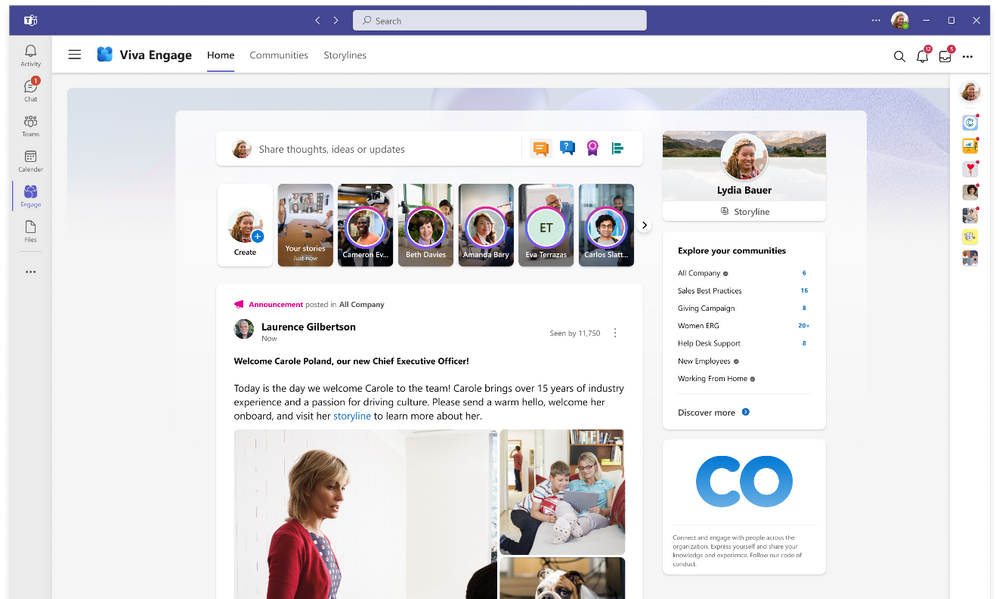 During its annual Inspire event, Microsoft presented the New Viva Engage app. The IT giant developed the app to expand the Viva employee experience platform’s reach. They are pitching it as an app for social networking and community building, using the Teams service’s Communities feature. The new app will not replace Yammer, Microsoft has affirmed. The Yammer web experience and native Yammer mobile apps will continue to be a part of Microsoft 365 SKUs. According to a corporate blog post, the same communities, narratives, and stories are made available through Yammer and the new Viva Engage app. Yammer, Microsoft said, will be “brought to Microsoft 365 and Viva,” and the company will continue to invest in it.

Engage will be available to all existing Microsoft 365 commercial customers at no additional cost. However, Yammer licenses are required to access the app. The Communities app for Teams will be rebranded as “Viva Engage” within the next month. Similar to the Communities app, the Viva Engage app will also be available through the iOS and Android mobile apps for Teams.

Viva Learn, Viva Topics, Viva Connections, and Viva Goals are components of the Viva employee experience package available within the Teams video-calling software. Microsoft officials have reportedly claimed that the corporation intends to integrate the Glint HR capabilities into the Viva suite by 2023. In addition, Microsoft has dubbed a new CRM companion software Viva Sales, although it is not a component of the Viva Suite.

Viva Connections is similarly based on Yammer and is intended to provide — news, conversations, and resources, which may mislead users as the new Engage app appears to do the same function. The research clarifies (as stated by Microsoft representatives) that “Viva Connections is about connecting employees to company resources, whereas Viva Engage is more about connecting people to one another,” while also providing executives with “new options to engage in discourse with employees.”

Also, Microsoft is adding a few personal expression features to the Engage app as part of the Viva community experience, as well as news and conversations from colleagues and the business. Storyline, Stories, and Video Clip are some of the options available.

OneDrive for business and the Microsoft Stream video service are the foundations of the Storyline & Stories product. In an interview, Microsoft officials said that the Stories feature would be similar to those on Facebook and Instagram, where users can instantly share and publish short movies or photographs.

Storylines, on the other hand, will let users submit links, files, photographs, and videos that will be accessible in Viva Connections, Outlook, Teams, and Yammer. It’s also possible to see the feed of these entries in a separate tab called Storylines.