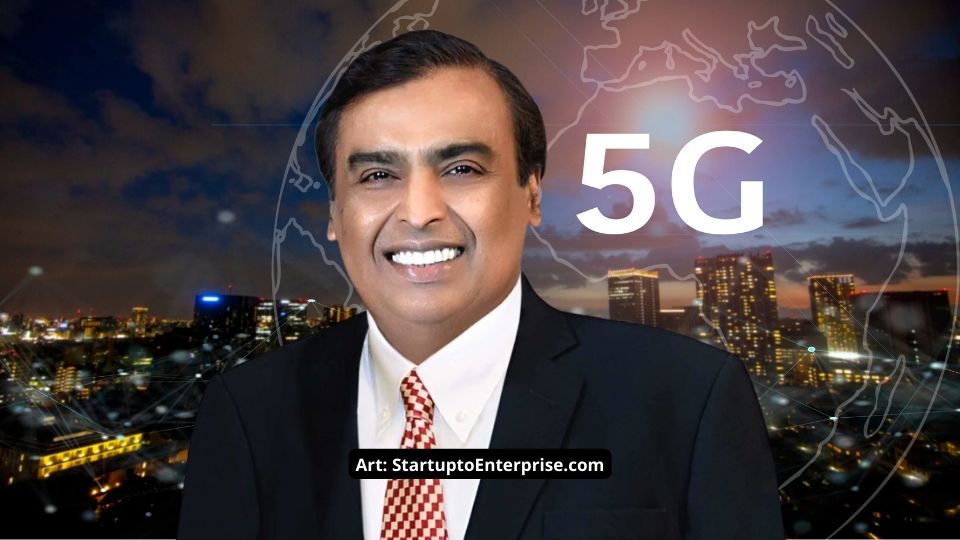 The race for 5G Spectrum has finally concluded after 10 rounds of bidding. Today on Monday, August 1, 2022, a substantial slab of 5G telecom spectrum got sold to Mukesh Ambani’s Jio telecom services as he emerged as the highest bidder. Now, it is Reliance Jio 5G now dominates the spectrum with the majority holding.

It is estimated that the value of the 5G telecom spectrum sold to Mukesh Ambani’s Jio is Rs 1,50,173 crore. Compared to the Rs 77,815 crore worth of 4G airwaves sold last year and the Rs 50,968.37 crore obtained from a 3G auction in 2010, the mop-up from the 5G spectrum, which is capable of giving ultra-high speed mobile internet connectivity, is almost twice.

Speeds up to ten times faster than 4G, lag-free connectivity, and real-time data sharing for billions of linked devices were the most sought-after airwave frequencies. Bharti Airtel and Vodafone Idea Ltd. were the next two to enter the market. Private telecom network construction by Adani group, a newcomer, reportedly resulted in purchasing a 26 Mhz spectrum. They indicated that after all of the auction data is completed, we will know which companies purchased how much spectrum.

With Vodafone Idea’s restricted participation, both Bharti and Jio are likely to have built a pan-India spectrum footprint for 5G. Spectrum in the 600 MHz, 800 MHz, and 2300 MHz bands was on sale by the government, but no bids were received. As much as two-thirds of all bids were for 5G bands (3300 Mhz and 26 GHz) and the 700 Mhz band – which had previously gone unsold in the auctions of the previous two years (2016 and 2021).

With 5G Internet, India will experience more advancement in e-health, IoT services, augmented reality and metaverse experiences, life-saving use cases, and advanced mobile cloud gaming, in addition to powering ultra-low latency connections that allow for full-length high-quality video or movie downloads to a mobile device in a matter of seconds (even in crowded areas). Reliance Industries can greatly leverage Reliance Jio 5G network to advance their research and development besides the obvious fortification of its telecom network.

The auction started on July 26, 2022, with total bids totaling Rs 1.45 lakh crore, with only small increases in demand on subsequent days. It was also speculated that new entrant Adani Data Networks Ltd., whose bids were closely watched by competitors, would potentially rock in the finals. However, Adani bought 400 MHz, or less than one percent of all spectrum sold, for ₹ 212 crores. Vodafone Idea Ltd., seen as obligatory participation with Bharti Airtel, has emerged as the underdogs.