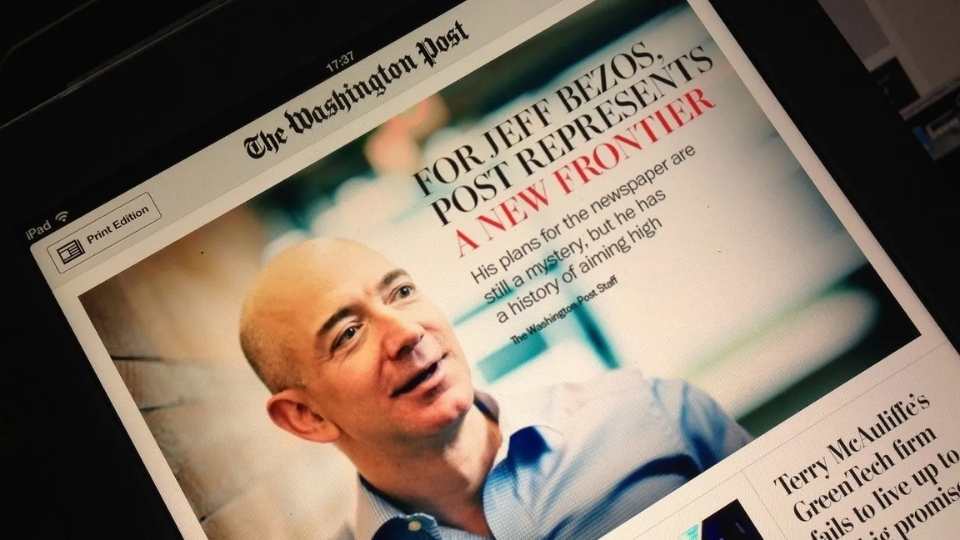 Talk of the town across global villages, tall, bold, and wage killer, Amazon CEO Jeff Bezos recently filed his departure, has got some past dues.  On buying The Washington Post, he said that the newspaper being in the capital city of the most important country in the world has an incredibly important role to play in this democracy. Today, as Amazon daily workers protest for minimum wage revision, he takes out The Washington Post from his pocket of investments and flashes native ads portraying Amazon’s advocacy of higher minimum wage.

In 1993, Eugene Meyer bought The Washington Post from a bankruptcy auction for $825,000. 10 years later, as free listing directories disrupted classified ad revenue leading to a decline in revenue for digital and print publishers, Jeff Bezos re-rescued the WaPo in 2013 for $250 million. What he rescued was a loss vending machine as circulation dropped from 832,332 to 474,767. The man who grew Amazon to a hulk that has turned into a nightmare for its sellers and wage workers got his hands dirty to make the new acquisition profitable.

Like any standard digital news media, The Washington Post is a subscription-based business model. It allows visitors to read some free content while reserving the best coverages for a paid membership. It also sells digital and in-print space for advertisement. This helps the operations stay hydrated in print and digitally, covering all costs. Besides these two revenue streams, The Washington Post, as a legacy brand, has a high asking price respected by businesses for the value it generates for its Sponsors and advertisers.

After Bezos acquired the loss vending machine in 2013, unable to monetize its journalistic operations, Bezos worked out a loss recovery plan to resurrect The Washington Post.

In September 2014, Jeff appointed Frederick Joseph Ryan Jr. as the publisher and chief executive officer of The Washington Post. Earlier, Ryan was the president and chief operating officer of Allbritton Communications Company. He was the Founding CEO & President of Politico.  Ryan launched the“PowerPost,” a direct competitor to Politico, to attract the DC elite/influencer subscribers/readers with higher willingness to pay.

Bezos 360° digital authority plan focused on increasing web traffic through custom content and visitor data collection. He got his engineers to work on Page Experience and focus on Google’s Core Web Vitals with differentiated experience for web, tab, and mobile users. Under his leadership, WaPo hired engineers to develop its own ad-server, pay-meter technologies, and content management system for text and video licensing. Learn all the features developed by the RED group at The Washington Post.

WaPo is distributed through Kindle apps, Flipboard, and MSN. Bezos even got WaPo as a bundle offer with Amazon’s Prime subscription. Like Salesforce Partner Network, Bezos explored the affiliation opportunity and built The Washington Post partner program. Jeff’s network of local newspapers that sign up for WaPo’s digital suite is arguably the finest psychological hack that serves collective benefit to all.

All in all, Jeff Bezos rekindled The Washington Post; he re-established the news outlet to keep it going and sustain a minimum of 800 highly experienced professionals who lend their expertise to man journalism.

Did you read our story on Amazon issuing a warning letter to its employees? It explains the work culture of Amazon, its employee relationship contrary to what the business projects through press and media coverages. “The Founder of The Congress of Essential Workers (TCOEW), Chris Smalls, formed the Amazon Labor Union (ALU) at the State Island warehouse. The demands include a hike in pay scale, time-off, longer breaks, support for Covid-19, workplace safety, & improved employee advocacy. ALU has created a fundraiser for a solidarity fund to help volunteers launch the drive.” StartuptoEnterprise.

While the ongoing wage issue continues, D.C. Attorney General Karl A. Racine accused Amazon of fixing prices for third-party sellers. In this new Anti-Trust Lawsuit, the attorney general accuses Amazon of preventing sellers from charging a low price either on its own seller portal or with any other company or personal business website. This way, Amazon constricts sellers from making enough sales to sustain their businesses profitably and at a much larger scale. Reading this, many may argue that it is on Bezos to determine the cost to allow sellers to transact through Amazon. Yes. But, Bezos can’t dictate the price for any other platform as a part of the seller contract when he is unwilling to let sellers make desirable income.

Jeff Bezos leadership has several issues. You can’t separate him into clear embodiments. While the 800 employees at The Washington Post and non-Amazon-warehouse workers will be all praises of the person for his vision on land and plans to Mars, he is certainly unsafe for a bigger percentage of people. Earlier in 2021, Amazon disclosed in a public statement, “In 2020, Amazon created approximately 500,000 jobs for people with all types of experience, education, and skill levels. In addition to offering starting pay of at least $15 per hour in the U.S.”

Under sustained pressure from Bernie Sanders and other congressmen, while Amazon agreed to hike the pay, it started to lobby with Congress and the White House for “Raise the Wage Act.” On the surface, Bezos informs the world about its goodwill, but below the rug is the strategy to compel local businesses to hike their hourly wage irrespective of the money they make. His strategy ascertains local businesses failing to accept or sustain the new wage hike, lose their workers, and shut their small businesses one fine day. Bezos is going to space at 60, so deciphering Bezos isn’t easy. While he markets “Raise the Wage Act” across America and through his sweet child, The Washington Post, he continues to fund the US Chamber of Commerce and the Business Roundtable that oppose the $15 minimum wage.

At the outset, it is conflicting to compete with the vendors on one’s platform. There is no objectivity left in Bezos fighting with sellers on Amazon Marketplace. There’s nothing objective in advertising Amazon on The Washington Post to wax eloquent every criticism received for its wage conflict with warehouse workers to advertising itself as the best workplace when he openly upholds the hire and fire policy. It is accepted and appreciated that he resurrected The Washington Post from the deathbed, but as a father to the Pulitzer-winning news media, he can’t sleep with an adult child, wiring it hard to echo his waning business ethos.