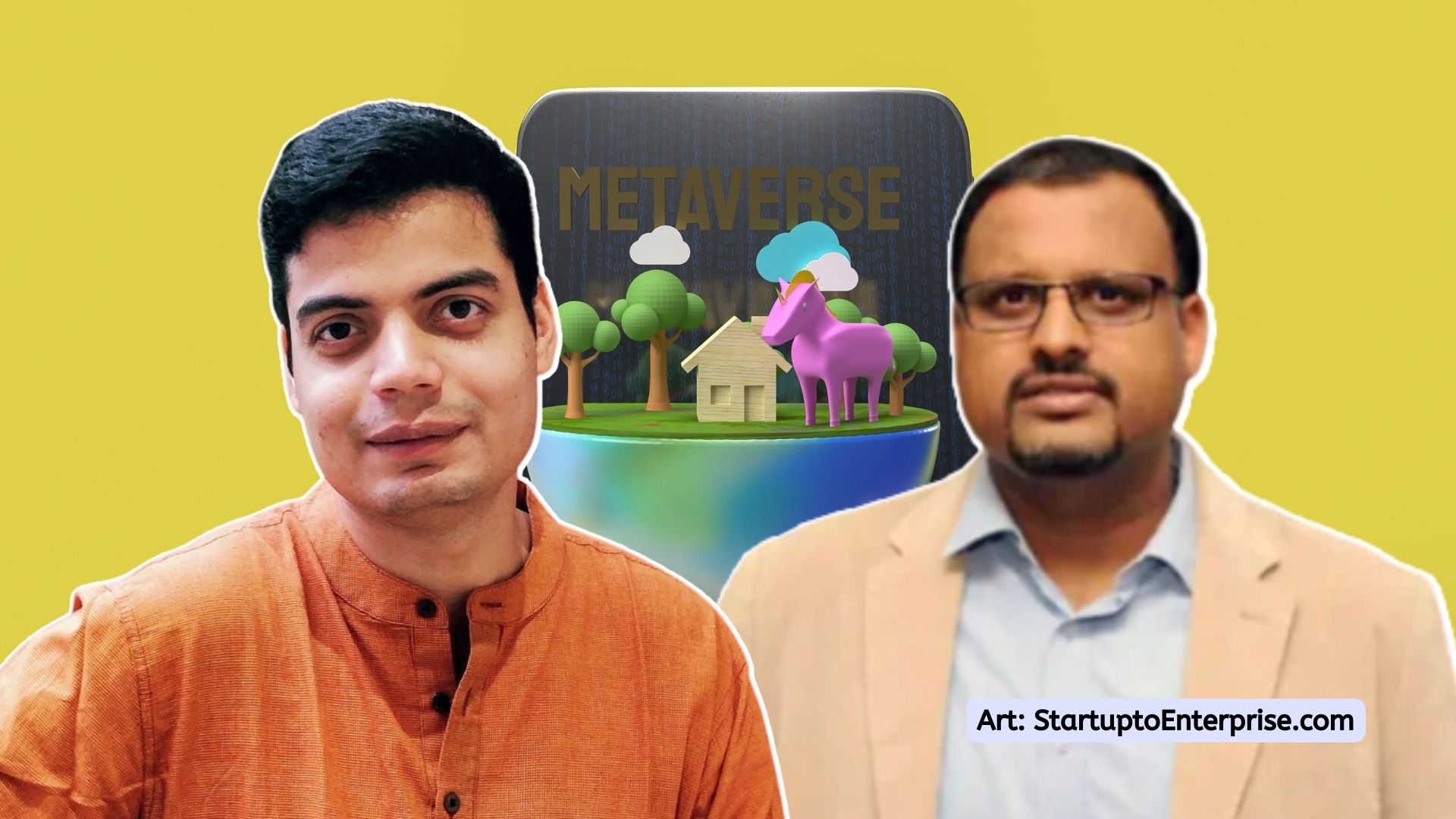 At this moment, a lot is happening in India. Starting from massive layoffs to the preparation for the upcoming Shark Tank India and then edtech crumbling worse than cookies, you have a moment for every enthusiast. Among these, the most interesting appears to be Invact Metaversity.

What is Invact Metaversity? Invact Metaversity is the imagination of a hyperloop MBA in a virtual environment, which isn’t a recorded or live face-to-face classroom but a more adult version of Google Earth view where you can imagine yourself walking into some campus. Some use of AR/VR, a 3-D rendering of university life.

Twitter (NYSE: TWTR) India’s former head, Manish Maheshwari, and Microsoft’s former executive Tanay Pratap founded Invact Metaversity in December 2021, but now, the two are considering winding down the venture within six months of its launch. As it plans for a wind-up, there are speculations around pivoting to another model, letting one founder takeover, returning the fees to the students, and returning unspent capital to its investors.

On May 23, 2022, Manish Maheshwari wrote a Tweet thread explaining that “we” or he did not mean Invact Metaverse to be another online school. The aim was to deliver a “significantly differentiated learning experience” to students for students leveraging Metaverse. However, in the short run, he discovered that despite all funding and hiring world-class technologists, things fell apart.

In the series of tweets, he thanked his cofounder Tanay Pratap, who, despite working tirelessly, failed to determine if Invact Metaverse was an education company or a metaverse company and what approach they should undertake to realize the vision that got them funded. He bravely admits not having reached the moon, but the question is if he collected debris on the way?

The two got their seed idea funded for $5 million in February 2022. Future Group’s Kishore Biyani backed Invact Metaversity along with Infosys’ former executive TV Mohandas Pai and over 70 top global leaders and founders. For its inaugural MBA course of four months, it shortlisted 60 students, who are now, as per Manish, will receive their deposits.

When Manish Maheshwari shared the same “unqualified apology” on Linkedin, Indian edtech activist Pradeep Poonia made his pithy remark. Pradeep said, “we did try to reach for the MOON”! That’s what it was all about? Jumping in on the Metaverse bandwagon, throw some fancy trending terms (metaMBA!), and cash in. This was never about education. 60 students applied for it, many of whom quit their job to enroll as it was a condition put by the company, wasted 3-4 months, just 9 days before the start of the course you canceled it and left the students wondering what to do now.”

Pradeep further adds that “This is why EdTech is in a bubble state right now. People with zero educational or teaching experience come up with fancy ideas without any research showing whether tech will enhance true learning outcomes or not were getting funding. People have tried to force-fit many other techs in education, VR, AR, QR codes on every page of a book and whatnot. पढ़ने वाले बच्चे ना इन चोचलें बाज़ी के इंतजार में नही बैठे।” 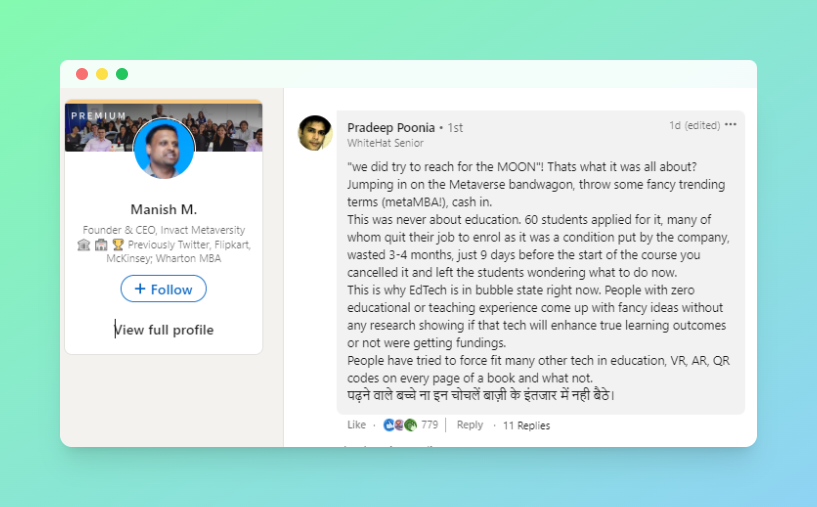 Tech startup investor Gergely Orosz also came up openly criticizing the act of Manish Maheswari. He commented, “Manish, I am an investor in Invact. This is the first time I hear from you about trouble at the company from you. The first time I heard about trouble at all is when Tanay Pratap “went rogue” to let investors know what is going on, despite you not giving him the names and contact details of investors and with a proposal for a way forward which investors agree with. You have quite the professional reputation built up over decades, which reputation, no doubt, helped raise this investment. I hope this situation will get handled in a way that lives up to that reputation. Tech is a very small world, and word gets around.”

Gergely further explains that “Sometimes you need to step aside and let builders build, and the company to succeed. I invested because I believe that Tanay Pratap has the execution skills to make this company a success. He still does. As an investor, I don’t see the company failing. The product is impressive. The vision bold. The tech team strong. What I do see is that the company needs new CEO. And it needs a CEO who is a builder, a doer, and one who does not refuse to meet with investors or communicate with them. Manish, the company and investors both need you to step aside, and let Tanay Pratap continue executing.” 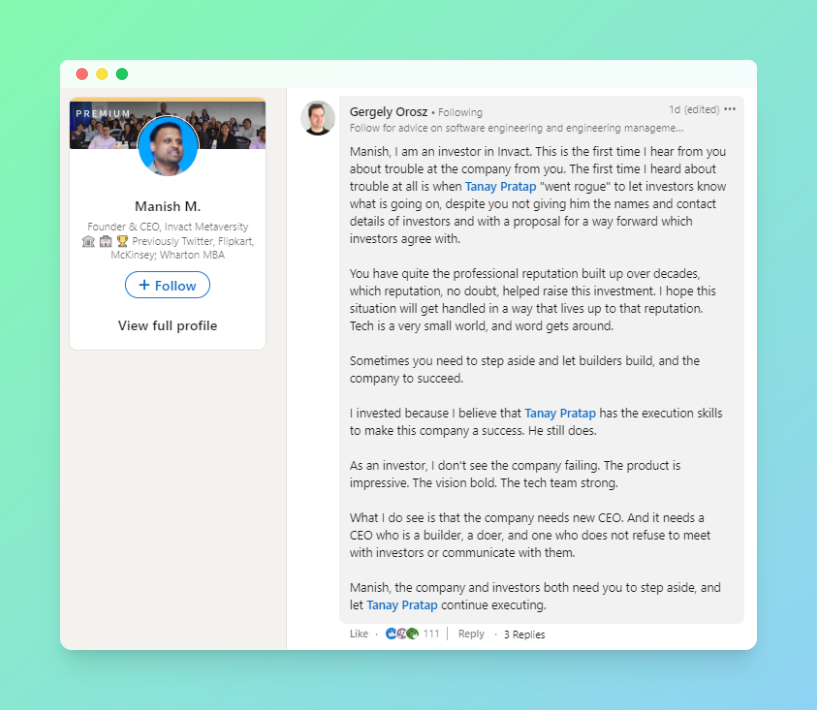 But to all of these, if you are curious about any statement from Tanay Pratap, there hasn’t been one to notice both on Linkedin and Twitter, where of course, on May 19, he made a cryptic tweet about hard times revealing true friends—not connecting the dots that are too obvious to the eyes. But now do we see the glass half full with ill-gotten edtech funding?