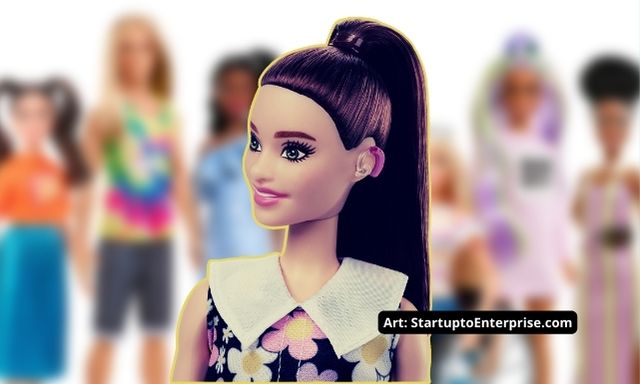 According to World Health Organization (WHO), by 2050, approximately 2.5B individuals will experience hearing loss, and at least 700M would need hearing rehabilitation. Due to over-exposure to unregulated noise, more than a billion young adults are at risk for permanent hearing loss. An extra yearly expenditure of less than $1.40 per person is required to develop ear and hearing care services worldwide. This yields a return of roughly US$16 for every US$1 spent over ten years.

Now, the intention was to build a premise for our aging Barbie, now 63 years old. Born on March 9, 1959, Barbie wasn’t born in any manger but at the American International Toy Fair in New York City. The news is Barbie is experiencing hearing loss, and therefore, in her edition, she is wearing a pair of hearing aids.

This news of Barbie wearing hearing aids has impressed people worldwide and particularly from the community of people with impaired hearing. According to the people with hearing disabilities, this would spark more collegiality and inclusion among many cultures within the deaf community.

The new Barbie with hearing aids will influence change among people to be more inclusive and welcoming of people with hearing loss. This is undoubtedly Mattel Inc’s biggest move in favor of the hearing-impaired community leveraging assistive technologies like cochlear implants, Baha implants, and regular hearing aids.

Technically, a cochlear implant comprises a sound processor worn behind the ear. Under the skin, a receiver and stimulator receive sound signals from a transmitter and use them to activate the auditory nerve using electrodes implanted in the cochlea.

On the other hand, Baha is a new technology that combines a sound processor with a titanium implant inserted behind the ear to enhance hearing. Direct bone conduction is a mechanism that bypasses the middle ear entirely and transfers sound directly from the bone to a working cochlea.

Back in the 1970s, when a baby was born with a disability in the 1970s, parents were asked to “forget” the kid and put them in an institution. As a result, parents who did not follow this advice were stigmatized for keeping their children at home and forced to cope as best they could without any help. But with, the innovation of Barbie with hearing aids will smash all taboos. Young children with the condition would now feel more accepted and encouraged to grow up without guilt.

Even though the community with hearing loss is grateful for advancements in hearing aids, proficiency in American Sign Language (ASL) remains essential for communicating with a wide range of hearing, hard of hearing, and deaf individuals. ASL remains ubiquitous beyond school and college for business and professional services people.

Although Barbie is offensive to Islam and banned in countries like Iran and Russia, this edition of Barbie with hearing aids does more than restructuring people’s perception of Barbie as a cannon of the West and western ideologies. In a child’s world of imagination, a barbie with hearing aids is a great company for children who stay at home due to hearing conditions.

According to CNN, the new Barbie becomes a part of a new line of dolls that promotes inclusiveness and diversity and starting June 2022, it will be sold at Walmart (NYSE: WMT), Target (NYSE: TGT), and Amazon (NASDAQ: AMZN) stores in the US. We bite some hope for this new doll to be introduced globally, including in India.