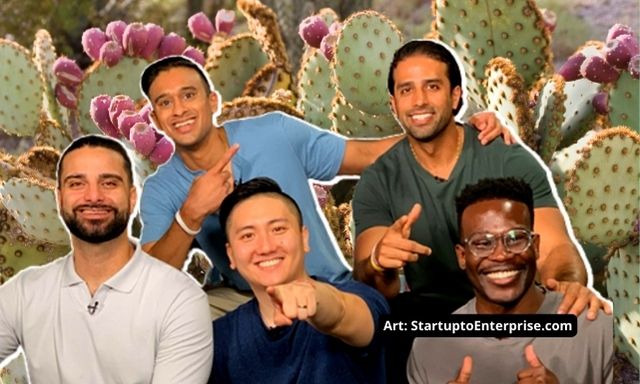 Seemingly ridiculous; who cares what America drinks or what Shark Tank US thinks? But, apparently, Pricklee Cactus Water has brought an existential crisis to Asian coconut water. Who do we blame? We’ve got the gang of Pricklee LLC; the CEO Kum Yang, COO Mohammed Hassoun, CMO Jaanai Babb, CFO Aakash Dheri, and CSO Sarwang Shah!

The story reveals that the founders of Pricklee™ Cactus Water are all erstwhile healthcare workers who fell in love with the recipe of the COO’s grandmother, who treated her grandchildren with Pricklee™ Cactus Water made of prickly pears of the cactus species. Ever since there was no turning back, the group decided to give America the taste of cactus!

Pricklee™ cactus waters use premium, sustainably-sourced prickly pears, the superfruit of the desert. Scientifically, cactus fruits contain more natural antioxidants than a cup of green tea (including Vitamin C, Flavanoids, Betalains, and Polyphenols). The brand markets it as an immunity-boosting drink.

According to the founders, it takes an average of three days of an antioxidant-rich diet, consisting of a large amount of fruit and vegetables to build a body’s antioxidant levels to defend it from oxidative stress. In this regard, prickly pears are an accelerated source containing twice the antioxidant capacity of strawberries, apples, and tomatoes, comparable to oranges, grapefruits, and red wine with Vitamin C than apples, grapes, and bananas! Well, let’s hold on until we discuss sugar.

Pricklee™, as a brand, is targeting the coconut water market. In their entire branding and communication, they have taken a jab at the coconut water community. Interestingly, will this strategy work, and are cactus water-selling peers (¡CACTUS!, TrueNopal, Caliwater, Green-Go™, and STEAZ cactus water) aiming at the same target audience? Natural coconut water sold as-is with short shelf life doesn’t pose any health threat except for those allergic to coconut the way they can be allergic to cactus fruit. Pricklee uses sugar compared to other no-sugar cactus water by TrueNopal, which raised $5.33M five years ago.

Shark Tank US in 2022 has got Mark Cuban, Robert Herjavec, Kevin O’Leary, Lori Greiner and Guest Shark Emma Grede to judge all startup entrepreneurs from Los Angeles and North Hollywood. It is quite a feat to hope for the Pricklee™ founders, Mohammed Hassoun and Kun Yang, to secure funding on Shark Tank Season 13 Episode 22. We’d hope that the judges decide to invest not only based on the returns of Pricklee™ but its real contribution to health (contains sugar) and sustainability pledge with US EPA.

DONATE TO SUPPORT US